I remember the first time I heard of this skinny Puerto Rican who can blow away a crowd with his vocals. My aunt Olga was talking about a guy named Marc Anthony that could sing as if he owned the entire industry. She spoke about his command of a song and even though it seemed like he never danced on stage, he was an amazing performer. This conversation was in the mid 90's.

I think that is a big endorsement from anyone in my family. See, my family has witnessed salsa in the 70's during the height of Fania. So people like Hector Lavoe and Willie Colon were household names. It made me think that I needed to pay attention to this guy.

When I moved back to NYC in 1998, I started getting accustomed to the night life. One thing that can be said about the bars in the Bronx, they love to play Salsa. This is when I really heard Marc Anthony. The first song of his that was stuck in my head was Nadie Como Ella. I absolutely loved that song so much that I had to pick up his album Todo A Su Tiempo. Since then his music has stuck with me. 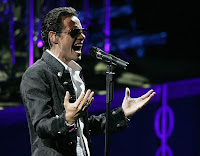 Marc Anthony was one of the reasons why I went on my mission to go get as many old school salsa songs as I could. I feel that he gets it. The way he sings and the music that is produced reminds me of being in the basement with my dad listening to El Gran Combo.

Right now, I feel he is where it is at in terms of Salsa. Of course there are a numerous amount of artists in this genre, some who have been in the field longer than him (i.e Tito Nieves), but once he starred in El Cantante he began to embody the music. I feel that his portrayal of Hector Lavoe was good and his performance on the soundtrack was just awesome.

I look at my iTunes and Marc Anthony is all over it. Maybe he was an easy choice as my favorite Latino Musician, but I would be hard pressed to find a better one.
Escritor Unknown at 11:50 PM