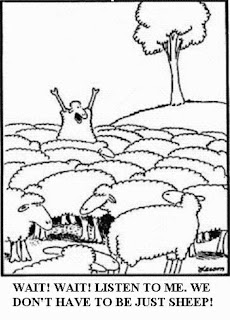 What I am about to write in this blog I started jotting down in mid June. I had trouble putting into words how I really felt about this subject and yet, I seemed to have summed up in my Facebook status yesterday. When I look at the current status of the world, I do realize that many people just don't get what is happening around them. I am not talking about worldwide conspiracies because that would be too easy to write about and yet so hard to prove but in any case it would make me sound like a lunatic. The only thing I want to point out is the economic gap isn't the only thing that is increasing between the rich and the poor, so it is the intellectual gap.

So, I have been feeling a certain way about the world lately. Maybe it is age or perhaps is wisdom from that age. I have always had a cynical view of how the world operates and thus, I have always been cynical. I have grown to be sarcastic and question everything around me and even myself. I play the devil's advocate at work and in my personal life. I point out the inequities in society on this very blog and yet I feel a sense that so many people do this blogging thing, or this twitter thing, or this civic duty thing as if they are in a popularity contest. Almost as if quantity is better than quality. Anyone can write a thousand blogs about shit, but in the end, it is just shit.

It is no secret that I am very critical of certain Latino blog sites and certain Latina Magazines and how they portray us, not only as Latinos but all people of color. I feel that there comes a social responsibility with the power that they hold over their readers and when things get dumbed down, it becomes an insult to my intelligence. Yet, very few people seem to notice things are said or things that are left unsaid. I feel we are in an era in which critical thinking is dying a very slow and painful death. People seem to become sheep. Most people rather read about list of top 10 maids or all time or right way to stuff a taco instead of  actual reading of world events.

I get it though. Life is a bitch and then you die. We all need some sort of distraction from the real issues. African slaves needed a distraction too. The slave owners allowed them to sing and dance and even go to church, but reading was forbidden. Gee, I wonder why. Now, we have free people of color but the slave mentality is the same. Most people still don't read, but we sure know that Kim Kardashian got married. We know when the Basketball Wives Marathon is on.

So yesterday, after I read something from one of the "publications" above I posted/tweeted this: Please understand, I am not like them. Me and them are not the same. When you think about them, then you are not thinking about me. So what did I mean by this? Someone close to me asked what was up with this cryptic message. My reply went something like this: Most applaud ineptitude and incompetence because they dont know better. Not all people, of course, but I see things that people say and write and it makes me shake my head. Sometimes I wonder, if it is just me. Am I being judgmental? Is this what being a leader is, when no one sees the same things...or is it being a pariah?

There are times that I wonder why I never joined a group or pledged a fraternity. Often times, I say that is not for me, but I could never really form the words to really express exactly why. I seem to be this person who can be so charismatic in person and online and yet fade away in a crowd when things feel so monotonous. I have come to accept that there things that just become so uniform to me that I get bored with things. I cannot force myself to do what everyone else does.

It is very clear that I march to my own beat. I think about how I was picked on in school for being different. I didn't do the things that other kids did like either hang out after school or smoke weed. Even in college, I was never  that dude drinking with everyone else at the bars or at the South Campus parties. It wasnt that I felt that I was better than everyone else, it is just that I didn't see the need to do what everyone else is doing.

Which translates to how I am now. I am no better than any one else. I am sure that I could have been a great member of any fraternity. I am sure that I could have hung out with all those people, in fact, I go out now and socialize because I recognize who I am and how I fit in this world. But, I have always had a problem with the majority view of the world. People are sheep. They seem to be plugged into this Matrix in which everyone believes everything they read or don't read. The ability to come up with a critical opinion seems lost on some. It is like when Jay-Z can come out with a song called "Death of Autotune" and everyone loses their minds talking about how he is this pioneer. Then, the very first song on his new album "Watch The Throne" has autotune. No one says...a word. Sheep.
Escritor Unknown at 11:14 PM