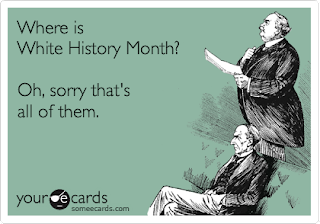 I laugh. I laugh at the ignorance of others and realize that at some point the American Education System has failed so many. I laugh because my sarcasm just does not cover the range of things that I could say to people who just do not know their history nor do they know what goes on around them. This is not limited to the young people in this country either.

What am I talking about? Is Black History Month the issue? Maybe it is and maybe it isn't but my issue is that ignorance is not constrained to just one month. It becomes prevalent as we get close to and into months like this. This really is a month of reflection on where we have been and where we are going. Instead, I feel we live in a world where people actually believe that racism is not an issue anymore. I am not even talking about white people.

I understand that most white people do not understand the intricate system of oppression. I get that they do not see white privilege. I see why they do not understand the black and white paradigm or why the color blind ideology is negative. I expect the responses from them because they are raised in a world that is made for them. But what about our people? What about Black and Latinos who have been white washed to believe that racism is a distant memory that they see in black and white news reels where they see black people being hosed by firefighters in the south?

I have often talked about the color blind Latinos. This is nothing new. The whole idea being lighter skinned in the Caribbean and South America is to obtain a high social standing. We have pretty much the same thing here in the United States when it comes to how black women are viewed. The concept of beauty is to be as light as possible (and as skinny as possible). African Americans should not feel that because Obama is President that we have gone through great strides in "solving" Racism.

On the contrary, racism is at the heart of the issue in the GOP political debates. While it is not being directly said, let's think about the tone of things being said and what we are willing to let people get away with. Newt Gingrich, who is known to say bigoted things, can come out and say that "Spanish is the language of the Ghetto" and where is the uproar? Sure, Newt will say that Mitt Romney fabricated such a statement which begs the question, even if Mitt did, how is this ok to even lie about?

I can use tons of examples of how Newt views the working poor (who are seen as black), but the one thing that is my absolute favorite is how Mitt Romney is now considered Latino. We as proud Latinos are so eager to claim anyone and of course we should because most Latinos are just as prejudiced against African Americans as white people.

What gets me is that most people don't see the things that are blatantly in front of them, which brings me the the Birdcage Analogy.  A few years ago I read an article by Marilyn Frye called "Oppression." In this article she talks about the oppression that women endure by the hands of men. I have often believed that if one group of people are oppressed then we all are. Even though she focuses primarily on women her Birdcage Analogy fits racial oppression very well:


Consider a birdcage. If you look very closely at just one wire in the cage, you cannot see the other wires. If your conception of what is before you is determined by this myopic focus, you could look at that one wire, up and down the length of it, and be unable to see why a bird would not just fly around the wire any time it wanted to go somewhere. Furthermore, even if, one day at a time, you myopically inspected each wire, you still could not see why a bird would have trouble going past the wires to get anywhere. There is no physical property of any one wire, nothing that the closest scrutiny could discover, that will reveal how a bird could be inhibited or harmed by it except in the most accidental way. It is only when you step back, stop looking at the wires one by one, microscopically, and take a macroscopic view of the whole cage, that you can see why the bird does not go anywhere; and then you will see it in a moment. It will require no great subtlety of mental powers. It is perfectly obvious that the bird is surrounded by a network of systematically related barriers, none one of which would be the least hindrance to its flight, but which, by their relations to each other, are as confining as the solid walls of a dungeon.

Grasp the power of this analogy and realize who the bird in the cage is. There needs to be a general understanding of the system of oppression in this country that is not limited to just people of color. When you do not see the wires of the cage then you do not realize that you are trapped. Like the bird, people think everything is ok in their world and automatically resist the urge to step away from it. Kinda sounds like The Matrix, huh?

It is only when you can step back and see the cage or the system as whole do you realize the grand scheme of it all. The only way to see the entire birdcage is to educate ourselves to these things. Let's not forget the people who own the birdcage are apart of that system. They may not see it that way because the system has been that way for years and they are just doing and benefiting from such a system for centuries that they have no idea that it even is a cage.

I get tired of the unwillingness to understand the need for Black History Month by hearing such a question like, "Why is there no White History Month?" Very simple. Every month is White History Month. The fact we even have to be given a mere month to keep the masses aware that Black people did contribute to this country is just another part of the wire in the cage. Just like when the Tea party wants to ban any mention of the founding fathers having slaves from History Books because it gives a negative view on them. Perhaps the fact that Arizona can ban Mexican Studies should suggest that many people wish to have a color blind education. The funny thing about being color blind is that you see no color but we are are Black and you cannot hide that.