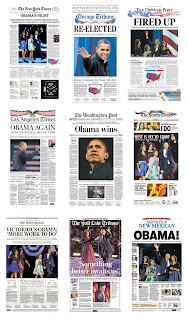 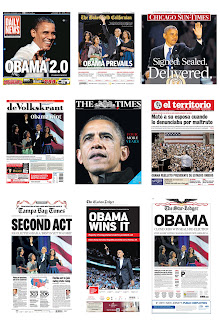 You know, I started this blog in 2009 — two days after Barak Obama was inaugurated. I felt so much hope for the country, for my students, and for my own life (which was in turmoil at that time). So I like to think that this blog lives on during his presidency in some small way. It also made me think that I needed to get back to who I am…which is a writer.

That hope that I have for myself and my continuing journey has seen a lot of hardship along the way. I have doubted myself and many times almost succumbed to fear. Yet, I have turned on the television and see the leader of the free world and know that I have to keep working at it. I need to continue to believe in myself. Even more importantly, I think about how many young boys and girls are going to grow up knowing a Black man will be president for 8 years of their life. That stark reality is amazing to me.

Of course, the fact that Obama is getting another 4 years does not excite everyone. This is a deeply divided country, in which, he did win the popular vote but that is just by a little more than 1% more than poor Mitt Romney. While the GOP is reeling, there are tons of unhappy conservatives who are making it known that they do not want a nigger in the White House. These are things that I simply cannot make up and while most of these people may be ignorant, these were the people that also came out in full force against Obama (and not necessarily for Mittens). That is why I had a bad feeling but I suppose I was just being overly cautious.

The truth of the matter is that I said it all along, this is a race issue. When the networks were analyzing the data they came up with some staggering numbers about the white vote. While I may be off in my numbers, the percentage of white votes dropped about 8% from 2008 white Latino voters increased about 10%. When we are talking about millions of people…that is a huge amount. There is no secret that people of color came out in full force. The funny thing is that this is no longer a voting trend. This is a fact that people of color are becoming more dominant in this country and in the political landscape. That is something that the GOP will have to figure out before 2016 because the extreme ideas about immigration and women's right will not fly anymore and that is not even considering gay marriage.

Times are changing because Latinos will eventually force states like Texas to turn from a red state to a blue state. Gay Marriage is upon us faster than anyone anticipated and I am all for it. There is now even legalized Marijuana in Colorado and while I am against that particular issue, the fact of the matter is that this is what people voted for. These are things I never thought I would see in my life time and that also included the proposition of Puerto Rico to become a the 51st State. I can be very vocal on this issue of Puerto Rico, but I will save it for another time.

All of this makes me think about where I will be in 4 years. While I have pretty much done what I said I was going to do this year, there are still more goals that I have to reach. There are still some plateaus that need to crossed. I know that I can do anything I set my mind to…and when I feel the weight of the world on my shoulders, all I have to do like that our President and realize that he has accomplished his goals…so that means I can accomplish mine.
Escritor Unknown at 9:42 AM