The Pursuit of My Dream 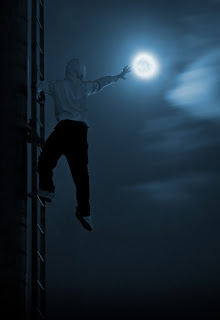 So the real question for me is...What is my dream? What is it that I wanted to do when I was a child? The only thing that I really wanted to do was write. As a kid, I used to create characters and superheros with elaborate histories and complex stories. This used to be my fantasy. I am not sure where it stopped. But, I was under the impression that comic book writers did not get paid much, so before college, that faded.

Let me mention again that when I was a child that I used write horror stories that involved my classmates. I would let them read it and listen to how amazed they were about how I used my imagination to scare everyone. Of course, as much as I tried to impress the girls that I liked, the guys I perceived to be better looking and less intellectual seemed to get all the attention in the end. So I stopped doing that.

In high school, I used to write sexually charged stories about women I met on the street. Many of them included teachers that have taught me.This is one tidbit of info I have never shared with anyone. I got to the point where I had a note book filled with chapters of, what I would consider now to be, smut. In the end, I felt ashamed that I was 15 and writing thinks about sex that I had no knowledge of. I ended up throwing out the book because I did not need my mother finding any of this.

Once I got to college and realized that I really should not be a History Major, I was looking to do something that I really wanted to do. So one of things I also thought about doing is being a screenplay writer or a play-write. So, in order to transfer to schools within Syracuse University I need to have a certain GPA and I needed to write a 5 minute script. My attempt was to join the school of Visual & Performing Arts because there was no way I was getting into the Newhouse School of Public Communications. So I wrote this script called "Call Your Mother" which was very emotional for me to write. It is about a son and his conflict between his divorced parents. Consequently, I didn't get in due to my GPA and not the work.

I have actually kept that script. It is just sitting on my hard drive. I have tweaked it from time to time. I was thinking about adding to it, but I wrote it in such a way that is perfect the way it is...to me anyway. Poetry was never really on my mind. I didn't care for it and I avoided classes about it. However, and again few people knew this, I loved hip hop in the 90's so much that I used to write rhymes because I was so inspired (talk about lying to yourself)!

Finally, I became an English Major because it only made sense. I loved to write so much that I would correct other people's papers. Even in high school I made some money doing this. Writing was the only thing that came naturally to me. I would often joke in my 20's that I would write a book about my life because of some of the things that I have encountered. But, of course, when I graduated in 1996, all I hear is that English Majors do not make much money. So once again...I scraped this idea of being a writer of any kind.

In 1999, I found myself working in Corporate America and feeling very underutilized. The pay was great but I was bored. So I tinkered with the web and created a website. I posted pictures and just did dumb things, but it wasn't until I read a blog from a woman, that ended up being a good friend of mine, that I began to understand what I blogging was. Her writing was such an inspiration that I had to get to know her. At that point, I create a blog and even had my own domain. (Currently she is re-branding her blog and if I am really lucky...she will guest blog *waving at Nakia*)

However, my writing was amateurish at best. I knew it then. I had nothing worth saying and it showed in the way I wrote. I would talk about my daily life in NYC and Subway stories and while they were funny, that wasn't the person I was trying to present to the world. I would keep another version of the blog after I moved back to Syracuse on a site called Xanga, but I just wasn't happy with it. I didn't know how to find my voice and I didn't know how to deal with writers block. However, every now and then I would write a blog entry on Myspace..so clearly, I could not let it die.

It wasn't until January of 2009 that I started this blog and found my voice. Once again it was because I was inspired by a blog that a woman wrote (a different woman, *waving at Brooke* and I am friends with her too!). I had not written anything in 2008 and it showed. I wrote every day until May. Once I really stopped lying about my life and confronted my fears, is when this blog had really taken shape. Now, I manage 2 blogs, the other one being on tumblr for more creative work.

My dreams have shifted over the years and I still very much want to be an author. I also want to be a public speaker as well. There are obstacles in my way and they do slow me down. But after reading The Alchemist, I now know that those obstacles are objects that are placed in my way to make me appreciate my life and all the efforts it is currently taking for me to get where I need to be.

I still have that screenplay and I still have some short stories that I have written. There is also the poetry that seems to pour out of me. My dreams are very much to make an impact on this world. I love working with students and who knows where my Higher Education background will take me...but I do know that this profession pays the bills. Perhaps when I reach my dream...I will pay back all the karma I have spent just to get there.
Escritor Unknown at 9:28 PM