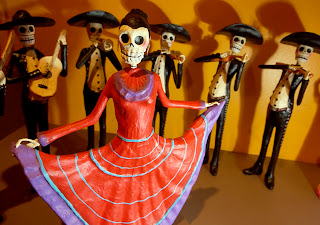 Interestingly enough as much of a nerd I am, I do not celebrate this "holiday" all that much. I would love to dress up but what bothers me is that when you buy a costume it never looks like the package. Sorta like when you buy a Big Mac, it never looks like the one you see on the commercial. More importantly, I have felt weird being someone other than myself. Most of the costumes you see out there are not particularly made for people who look like me.

I found myself looking at costumes a few weeks ago in case I may want to dress up for today. Most of the ones I was looking at were of black heroes like Morpheous from the Matrix, or Green Lantern. I thought about it, but then I decided not to. I am not sure that buying a costume is money well spent. I can thinking of many things I can do for $50.

I find it interesting that this day comes from Celtic traditional New Year holiday called Samhain. They would celebrate the end of summer and prepare for the coming of winter. It is also said that today, the barrier between the spirit world and the living is open allowing both intermingle. People would wear costumes to ward off any spirits that were to come near. This festival would begin October 31st and end on November 1st.

Coincidentally, Mexico and other Latin American countries celebrate All Saints Day and All Souls Day from October 31 through November 2. During these days they honor the dead, this celebration is called Día de los Muertos (Day of the Dead). This where shops decorate their windows with skeletons to not only honor the dead but invite the souls of the deceased to visit their families and hear their prayers. This tradition can be traced back to an Aztec festival dedicated to Mictecacihuatl the god of the dead (or lady of the dead).

Growing up Catholic I knew what All Saints Day was. I remember my mother burning a seven day candle that you get from a Botanica in honor of this day. It never escaped me that Halloween was followed by All Saints day. I grew up believing in spirits and how they can influence the lives of others. I can tell many stories about how Latinos in general have a belief of the supernatural. While I am not so much into organized religion, I do very much believe that the spirits and souls of those who have passed on are still out there. I do not mean in the Ghostbusters sense either.

People in other cultures from Africa to Asia, all honor their dead in particular ways. While we accept the Celtic tradition of hollowing out pumpkins or the English tradition of "go a-souling" (where people would go door to door asking for food and exchange they would pray for their dead relatives), we tend to look at this day as a day where we dress up and act a fool. For some it is a day of making fun of other cultures. This day has real historical meaning in most cultures.

Take the time to remember those who have past today. Our ancestors have paved the way for us and we would not be where we are without them.
Escritor Unknown at 2:11 PM