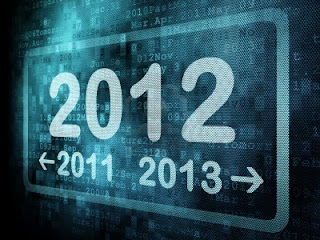 "Neo, sooner or later you're going to realize, just as I did, that there's a difference between knowing the path, and walking the path" - Morpheus

I always try to take one look back before I proceed into the future. 2012 has finally come to an end and I cannot help but be amazed of how I ended up exactly where I wanted to be. I will say that as much as I wanted this to be a good year, I wasn't so confident that it would end that way.

The first thing I decided to so was to take more risks. The truth of the matter was that at this time last year, I knew I needed to change my life before I went spiraling down in a flame of debt and foreclosure. What I learned from my woman was that taking risks shouldn't always be that scary. After a afternoon of learning how to ice skate --without falling once, I realized that I needed to invest in myself and take those risks that may turn my life around.

At the same time I realized that this blog was becoming a venue for me to complain and talk about things I would love to do but never follow up on. I was done with that. I need to stop talking and just do. The result ultimately ended up with me having less blogs than I anticipated but, the major goals I set were completed. Yet, as a writer, I did get more exposure than I ever thought I would with being selected as blogger for the Huffington Post. Yes, I feel like I keep saying this but I still find this to be amazing.  I wrote 4 articles and acquired a great deal of fans on that site.

Although, there were some bumps along the way, my second blog for the Huffington Post received some comments that I was not excited about. Looking back at it, it wasn't that big of a deal but, I did feel a certain way about it. I craft my words carefully (which is why I was called a Word Ninja) so that people can understand where I'm coming from. Usually, there are people who take my words to mean something entirely different (I'm still getting used to that). There was also the time in which the Huff denied a post from me. That was particularly hard to swallow, but I got over it.

I still believe that this was a banner year for racism. Despite the fact that Barack Obama won a second term, I believe we have seen so many signs of racism in the country that it is almost laughable if it wasn't so tragic. The death of Travyon Martin really took its toll on me when it happened. I think there is a lot to be said about the gun laws in this country and while I wrote nothing about Aurora and Sandy Hook shootings...I think eyes need to opened when comes to which populations are being effected by certain laws. I think more importantly it is the perception that people have that really shows how "tolerant" we are of other people. This does not mean I have strong words for just white people....my own people can be ridiculous too.

Of course with the things that I say or do, come people who have either a difference of opinion (which is fine) or people who downright cannot deal with me. This year, I have learned to take the good with the bad. Let those fester in there thoughts while I continue to move forward. I can spend a whole blog post on the telling of stories about people and incidents that happen earlier in the year that will be completely hilarious. However, in doing so, that will make them look bad. I am determined to be the better person always. I think I have succeed in that one thing before I left Syracuse.

There were several proud moments for me this year, but nothing did it more than me getting an A in my graduate course in the spring semester. Another reason for the lack of blog posts was the simple fact that I was taking a class. The reason why this was big for me is because I never got an A in any class in my college career. I think I did pretty good on this.

My, departure from Central New York involved risks has I mention above. I was lucky enough to sell my house and get an apartment for a short amount of time. There was also so much risk in just keeping the faith and hoping that my job search would find me something. I'll be honest, there was one point where I gave up. With my last job application submitted, I told myself that it was either now or never. If I do not get a job in NYC, I would have looked into Grad School in California. I had schools already picked out when Barnard called for the interview.

I will never forget that afternoon when I was told that I was hired. With my return imminent, I thought about all the things I would do when I got back home. But, I had to ultimately say goodbye to good friend. Yes, it was hard to say my goodbyes to colleagues, friends, and students but it was the hardest to say good bye to Rocky. I still love and miss that dog. He has remained in Syracuse with the x-wife. I still think about him everyday. Sad to say that all good things come to an end...SU will always be in my  heart.

However, I did learn that everything is truly connected. In the wake of my decision to move, my mother suffered a heart attack. This required her to have a quintuple by-pass surgery that we all were very nervous about. Of course, Columbia Presbyterian is one of the best places she could have very gone to, there is was always that horrifyingly small chance that something may go wrong. The good thing is she fully recovered which made my return even more glorious.

The rest of the year was filled with apartment hunting while being broke, Obama was re-elected, Sandy damn near destroyed lower Manhattan, my Macbook broke, and I am near obesity.

I think this was a good year. Very successful. Next year will be better. I will share a toast tonight for my friends, family, and to all of you who continue to follow me. Happy New Year!
Escritor Unknown at 1:59 PM