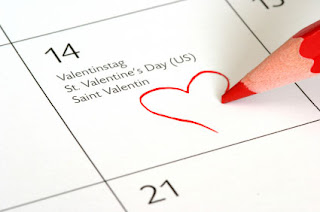 This has traditionally been a day that I have loathed because this seems to be universally celebrated as the day we profess our love (or like) to another person. For people who are not that lucky, this is a day that could not suck more. As I have gotten older and wiser, I can say that I do not feel either good or bad about Valentine's Day. Perhaps it is that lack of expectation and yearning that I once had that maybe I will be someone's valentine. It could be that once I had a girlfriend or wife that this day was further marred by mishaps and plain old apathy. There is a point when you are married that you start saying things like... "well we don't celebrate Valentine's day because you should tell that special someone you love them everyday"

Not to say that this statement is not true, but that day for me personally has always had some negatives to it. I remember not liking this day as a child. I would ask different girls around school if they would be my valentines only to get a resounding "no". As a kid, it is hard to deal with rejection of such because often times I thought it was me. Then I got used to it and never had a valentine all through High School.

I remember a time when I was roaming the halls in High School after classes were over ( I would often stay late because I was always involved in many extra curricular activities) and seeing this huge bulletin board that had cards or hearts posted up from all these girls sending in valentines to the school. I was in shock because I went to an all boys school and I had no idea that girls from other schools could do such a thing. Needless to say that I had none and I just walked away.

My first real valentine was in college. I remember that day fondly. I took a friend of mine to see Dreamgirls and had a pretty good meal. To do this on a college budget is amazing and I felt that it was well worth the wait. I started thinking that the days of bad Valentine days would be behind me especially since I had a girlfriend for the next two, neither of which were all that memorable for reasons I will not get into.

After that, I didnt have another valentine until I dated my ex wife so many years later. This was when 1 800 Flowers was making it big on the internet and I was doing what every man would do, order flowers to your woman's workplace. Well, after ordering the flowers well in advance...they never show up. Imagine having to explain to your girlfriend that you did indeed ordered flowers that never showed up. Not a good night, however, when they showed up the next day even after I called back and canceled the order, she believed me. So, of course this could not happen two years in a row right? I mean they contacted me saying that I had this crazy discount to make up for the previous mishap...yeah well...lightning does strike twice.

So as I said, there comes a point in marriage when many things stop and valentines gifts are one of them. I cannot help wonder if that is a good thing or a bad thing. But, as much as I can sit here and say that we should not wait until 2/14 to show someone how much you love them, there seems to be something stuck in all our minds that this day means more than what we let on.

It is just a hard day to figure out because the perception is that the man has to be the one to do all the flowers and candy type things. The woman does not even have to accept nor do she have to reciprocate. Many of my male friends will easily tell me that this is a woman's day and all we get is like christmas (haha). Perhaps I am just jaded and I see things from a very narrow view and if that is the case then I accept that. Maybe I am just used to being treated a certain way or not being treated the way I want. It is hard to tell, but I will say that very few women have generally surprised me on this particular day and I do not see that changing anytime soon.

I think the only thing that has changed for me is expectations. I do not expect anything from anyone. So if I do send flowers chances are I am not expecting anything in return. To me, it is better this way. I have learned that life is not fair and I am ok with it. I am not saying this in a depressive way, I just think that things will happen when they happen.

However, I would like to to stop being what I have now dubbed a "Valentine's Dud". There will come a point in time when the stars will align enough for me to have memorable 2/14 and if not, well, I will always have something to write about!
Escritor Unknown at 10:42 AM

I guess I'm also a bit of a dud. I really don't place any importance on Valentine's Day. My husband and I go to dinner, but I banned gifts years ago. And I'd be just as fine doing all the typical Valentine's Day stuff on another, less commercial, day. It's how we feel and what we do; it doesn't really matter which day that falls on...

V Day is commercialized but what holiday isn't these days. I also feel that you should show someone you care every day of the year and that's very true but people make it extra special on V day well those that choose to. You sound like love has left a real bad taste in your mouth you shouldn't allow your past experiences to make you jaded perhaps you just haven't met the right person yet but don't let the past hold you back from living the future.