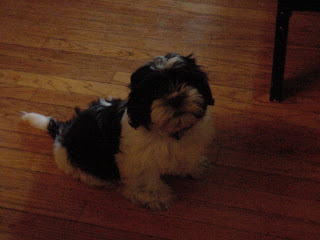 {Originally Posted on Myspace}
It is been awhile since I last wrote anything. It has been a busy summer for me. Went on a cruise (pictures will be posted soon), been to NYC a few times, took care of 2 little girls for about a month…just to name a few things. The one thing that happened that was so unexpected was the death of my youngest dog, Rusty.

Rusty was a little over 4 years old and died of cancer. I have never seen an animal deteriorate so fast. We noticed the problem when we sent him to get groomed and had noticed large lumps around his throat. That weekend we had a fourth of July party and he was not as lively as we have become so accustomed to. When we saw the Vet, she confirmed what we had feared and gave him 3 weeks to a year. After giving us some medicine that would make him feel good we had to consider his fate.

The vet had also told us that with treatment we could prolong his life for maybe another few months to a year, but was very adamant that Lymphoma (the type of cancer he had) in dogs was incurable. Sure we could treat it but, that was a lot of money. The medicine she gave us was steroids that would shrink the lumps for a time and make him return to his old jolly self. Return to himself, he did. It was almost like a miracle, and it was like what the Vet said was a lie. Why would Rusty die?

Weeks pass and we don't notice anything. He is fine. Until, one night….he just stopped moving. He would move somewhat slowly, if we called. But I knew he would not make it passed the next day. That next day was a Friday (7/27) and we had to go to NYC to drop off the kids and to see my nephew Justin. I will never forget that morning. Rusty was delirious. He could barely walk. With tears in my eyes, I watch him collapse in the backyard as he struggled for air. I called the Vet, sure they can take him…for about $300 they will put him to sleep and bury him; oh yeah and for an extra charge they will us his ashes. One more thing...we can't bring him in until noon (it was 10am when I called). I had a bad feeling he would not make it. Not to mention the fact I needed to be on the road. I did call the animal hospital and while it was cheaper…they would not take him until noon.

When I looked over, I noticed that he made his way to a bush by the patio. He picked his spot. I knew that this is where he wanted to die. We did go to NYC and Maria, (a good friend) called me later to confirmed that he passed. I took care of things when we got back the following Sunday.

I created a Photo Album in his memory. I will miss him very much.
{Editor's Note: It is still very hard to read this story and I archived this one 2/5/09}
Escritor Anthony Otero at 6:16 PM