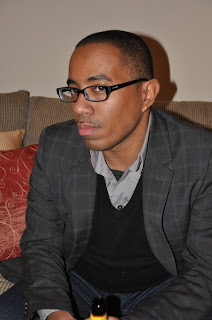 Below is my autobiography in exactly 1000 words. This took me 4 drafts and massive editing in about 3 weeks to complete. I just submitted this today. Please...be very candid with me and tell me what you think...

I grew up in the 1980's, where I witnessed the fall of the Berlin Wall, the birth of the Hip Hop culture, and the emergence of the era of greed. The fears of a nuclear war were real to me. I sought refuge in comic books as an escape from the world and my parents failing marriage.

I attended Holy Cross Elementary School where I discovered that I enjoyed writing stories involving my classmates. My love for comic books gave me the inspiration to write. In 1986, I saw my parent’s marriage end. My mother took me and left the house I grew up in. My father stayed as we moved across the Bronx three times in six years. I attended St. Raymond's High School where I grew conflicted with their divorce. Writing became an outlet to get away from the pain.

At sixteen, the divorce court judge asked me to choose which parent to live with. I ultimately chose my father. This decision was based on struggles of boyhood and masculinity. My mother eventually disowned me before my admission to college.

I enrolled at Syracuse University in 1992 as a history major. I was told countless times that there was no money in writing and I gave it up. After the first semester, I wanted to do something different and took an opportunity to change my major. I made several friends that majored in film and joined a club that did television skits while showing hip hop music videos. The show was called “The Rhythm.”

I enjoyed being creative and wanted to transfer into the College Visual and Performing Arts for film. The two requirements necessary to gain admission was to write a five minute screenplay and have a 2.5 average. My grades were not as good as they should have been, but I did write a screenplay entitled "Call Your Mother". It was about a boy and his relationships with his father and estranged mother. I was never able to transfer colleges, but I did finally change my major to English.

College was where I discovered my identity. While I always identified as Latino, I never knew what that really meant. My dark complexion would make anyone think that I was African American. I realized that my identity was fluid in nature since I can live in both worlds and not be accepted in either. It would take me years to figure out my place in the world.

I graduated in 1996. After working in Syracuse and dealing with a bad break up, I found myself back in the Bronx in 1998 dealing with my father having cancer. He was diagnosed with a rare form of cancer from working with asbestos in gas mains for Con Edison. Interestingly enough, he was able to take an early retirement and moved to Florida where he lives currently.

During my time back home, I moved into my own place. I started my first blog in 1999 called “A-bomb's World.” It was an amateur's attempt to write about life in New York City. I wrote for a few years and took it down at some point. I began to repair the relationship with my mother. Since I was not having luck with women, I felt solidifying our relationship would bring closure to our past.

I met my ex-wife in 1999. We dated for a few years and she helped me get a job down on Wall Street. I was there during September 11, 2001 during the World Trade Center disaster. I was lucky to be uninjured and it was then that I chose to leave New York City. A week prior, I was interviewing for a position within student affairs at Syracuse University. I was offered the job and I moved, taking my girlfriend with me. We married in June of 2002 and decided to follow every couple’s dream of owning a home in 2003. Soon after, life seemed to repeat itself as my marriage began to fall apart like it did for my parents. As we began to grow distant, I created the current version of my blog entitled "Inside My Head" in 2009. I realized that I stopped doing the one thing that really defines me: writing.

I came to terms with my identity. Being one of few Latino administrators at Syracuse, I became an advisor to many Latino students. I also helped create the Latino Heritage Month celebrations that still occur today. I took graduate courses in Cultural Foundations of Education because I wanted to further my education. I finally understood that I was Afro-Latino after soul searching through research papers.

This new found awareness is seen in my short stories, poems, and blog entries that were based on pent up emotions that I have had for years. I expressed myself in such a way that words poured out. It felt like my mind was once closed and writing opened it up. My blog has been a tale of my journey through marriage to divorce and identity that I call "the road to personal redemption".

After working at Syracuse for 9 years, my desire is to move back home. The job market is not good and I want to expand my passion for writing. In October of 2010, I went to a graduate school fair in Syracuse where I met a woman from admissions. Her love for Sarah Lawrence fueled my interest. I always felt that my style of writing was missing something and I want to explore that. I chose Sarah Lawrence because the reputation of the writing program is unmatched. In December of 2010, my divorce was finalized. I now have the power to look into the future a wiser man.
Escritor Anthony Otero at 4:54 PM