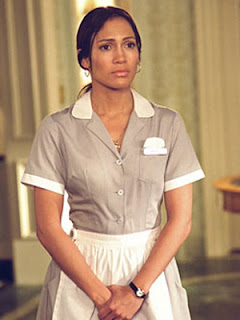 Here is something I don't understand. Latina Magazine can post 10 Latinas Who Have Played 'The Help' and we the people are ok with this? Sure, there was this wonderful blog that blasted Latina Magazine but I though that this would get more attention. I thought that perhaps people would understand how horrible it is for a magazine to perpetuate a negative stereotype.

First, lets talk about The Help which is a movie that came out this past weekend based off the book by Kathryn Stockett. I have not seen this movie and I really do not plan to as of yet. I say yet because I do feel in order to completely trash something you have to either see it or read it. But what I do know that Stockett was sued by Ablene Cooper who claims that the likeness of one of the maids in her book "Aibileen" was based off of her. Cooper was a maid that worked for Stockett's brother's family and I think it is a safe bet that she has a case. However, a Mississippi judge throw out the case based on the fact that Stockett send Cooper the book in 2009 and she didn't read it! She read it much later and the judge ruled that it was beyond the statuette of limitations (which I think is crap). So basically Cooper perpetuated her own stereotype that if you hide money in a book...a negro will not find it.

This movie is getting rave reviews from just about every critic. I am willing to bet that this movie will win an award or two, which will have me vexed. It is no secret that people of color in hollywood (in this case African American women) are more or less forced to play roles in movies that live up to the slave image. The Help is a prime example of that because it is basically like Aunt Jemimas on the silver screen. But, despite this, this movie gets praises from everyone! We love a good story when the white hero saves the negro folks from whatever.

What infuriates me is the whole notion that Latina Magazine (a magazine that is supposed to be for all Latinos *pause*) can make a top 10 list of Latina maids. Really? Can we make a list of top 10 tomato pickers? Or a list of our favorite Cholos and Cholas? Hold up, I got it...how about we make a list of favorite wetbacks! Yes! We can start with Elian Gonzalez and end with every Cuban pitcher that the New York Yankees "saved". To me this list of Latinas who played maids is the same exact shit! Are you telling me that Latina Magazine thinks that little girls who are growing up wanting to be an actress should aspire to be on the list? Really?

What about the 157 idiots on Facebook who actually liked this article? No one finds anything wrong with this crap? Hell no. They do not. You want to know why? Because they are very much like Ablene Cooper who doesnt read a thing until it is too late. Latina Magazine should be ashamed that they sold out like that. I cannot say that I am all that surprised considering it took them forever to have Afro Latinas in that publication.

Wait. How about this? How about we make a movie of a bunch of people who want to steal 20 million dollars from this rich white dude who is under house arrest in a building he owns. We can have these people (who are mostly white) get lessons from a Latino and an African American on how to be criminals. I know what you are thinking...they would never make a movie like that. Really? PEEP THIS:

I was linked to this from Guramrit's Twitter. I cringed the whole time while watching a preview of The Help and thought it must have been a joke, no way will people take this movie seriously. I am still in shock that it's receiving great reviews. And you're right, it's hard to judge without having seen it, (and I still haven't) but the whole thing just seems like a sick parody. As for Latina Magazine.... how the hell are we supposed to end racism and discrimination if our own people keep perpetuating the stereotypes? I don't get it. Gah, it just makes me angry. At some point we need to help ourselves. No pun intended.

Noelia, I also thought that The Help would not have been taken very seriously. I barely paid all that much attention to it when I saw the trailer in the movie theater. Then the ball just kept rolling...

The fact of the matter is... stereotyped sell. It is a damn shame that I just said this but it is true. They are making money off of the people they are representing.

Wow...I can feel your passion...lol. Way to call them on it! I'm disgusted that Latina Magazine would publish this ridiculous list! So glad you're blogging about it and shedding light on this stupidity. A true disappointment for such a large publication to "honor" Latina actresses in this way! I can't believe this film you mention at the end!

Thank you for this blog post!!! Very well written & TRUE AS ALL HELL.. Latina Magazine should be ashamed of themselves!!!!

Chantilly, I believe that it is our responsibility to call out those who need to be called out. Too many times people or establishments get caught up in the status quo and lose their sense of self (assuming they even had it)

AnnaMaria, you know we do. I am going to need you to do me a favor and tase the editor of the magazine...lol

Charging up my taser full force!!!!
The funny part is I met the fashion editor of Latina Magazine last year. And she defied ALL the sterotypes I had put in place. I figured she would be this tall slim beautiful latina who looked fresh off a runaway...
How about a short, chubby, frumpy looking chic.
At the time I applauded Latina for not falling into that sterotype and giving the job to someone who actually probably put in the hard work...
Guess they lost their mind this time.

Latina Magazine used to be a good magazine 15 yrs ago when they first came out I guess they had a real good editor back then over the years their magazine has deteriorated and is nothing but one big perpetuator of latino stereotypes, ghettoness, in my opinion has never really accurately represented all latinos so for them to publish something like this is ridiculous just shoots down their ability to publish good material and empower latinos. If you keep perpetuating ignorance and stereotypes everyone is going to perceive that they're true. I occassionally browse through their fb pg once in a while but most of it just gossip and stupidity and you know how our community can't resist gossip.

I have to totally agree with you on this one. You hit the nail right on the head.

I used to be a Latina mag subscriber a few years back. Once they changed editor in chief, I started noticing the quality of the magazine started going downhill - well, IMO.

Maybe their vision/mission for the magazine changed with a change in personnel? Anyway, point is, I never renewed my subscription after that. Why pay for or support something you don't like or believe in?

As far as "The Help" goes, that is ONE of the reasons why I refused to go see it when a friend invited me. It seems like films like these are just made to make white people feel better for going to go see them *shrugs*.

EG - I had no idea about the changing of editors which makes sense since people have often spoke about how the magazine has changed over the years.

I also have no desire to see "The Help", although, I find it hard to criticize considering I have not read the book or seen the movie. Perhaps I will catch on HBO or BET...lol

To do agree with a point that was raised by my Anonymous commenter. I am never thought that Latina Magazine accurately represented Latinas

I think those opposed to the movie and the book "The Help" are missing the point. Y'all are offended by the degredation portrayed in the movie and book, as you should be. But that's the whole point of it.

The movie and book do not aim to reinforce negative stereotypes of Black women or women of color. You have to understand the historical context that it's referring to, and before and during the Civil Rights Movement, the way that Black women who were nannies and maids were treated by whites was absolutely degrading. You see that in the movie. But the movie doesn't serve to promote this kind of behavior. Instead, it's an acknowledgement of the Black woman's struggle in America, especially during that time. So by saying that you don't take the movie seriously means that you don't take that portion of history and the struggle of these women and the Black race during segregation times seriously. This is something that is still relevant today as many women of color (Blacks, Latinas, Asians) still represent the majority of nannies and maids in the U.S., and STILL are treated as unequal by White people.