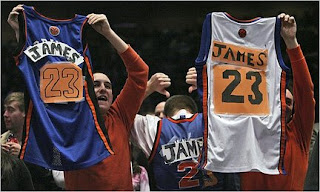 Is there no dignity left in people anymore? For years I have been trying to figure out why I have stopped being so into the NBA. Sure, I am a New York Knicks fan and probably the decline of that franchise has much to do with disdain for the sport, but I love college basketball. I think I has to do with people trying to be larger than the sport. The fact  the people are begging Lebron James to come to their city is just so distasteful to me.

Lebron James right now is not the king, Kobe Bryant is. He has won no championships and his move to another franchise does not guarantee one. The fact that people are making websites and personal pitches is ridiculous to me, especially New Yorkers. It is almost like people are worshiping a false god and it should really stop. New York has to realize that they are not getting Lebron so dick riding is not cool.

The problem is that he thinks he is larger than the game. It has become very apparent to me. At one point, I thought he would be the savior that the NBA needs, but I don't think that is the case anymore. Don't get me wrong he a fantastic player but he has nothing to show for it. The issue is that people are looking for their personal Michael Jordan. The person who will win multiple rings in a row and restore glory to their team. I get that but, let the owners and the GMs do their jobs. To see these people march in parades and have shows for him is absurd.

Basketball is a team sport and you will need more that just one person to win. Much like baseball, and New Yorkers know this well, you need to have the right people surrounding your best players in order to make it through the playoffs. The Knicks do not have that...he will not be the Derek Jeter we need in basketball. Why? Because Derek has never made himself larger than the game.

Michael Jordan was built up to be larger than the game by the NBA and Nike. The reason why this happened is because he brought it every night..and sure he talked a lot of trash and destroyed the Knicks every chance he got but, he was that good. He backed up all the talk.

Sure maybe Lebron is the chosen one...for the right price (and if you promise not sleep with his mom). But the whole way he is trying to corner the market with his free agency status will put him quickly on my athletes to hate on list. If he was a simple person he would just work on getting Cleveland a championship.

So while you are all dick riding Lebron, I will patiently wait for the NCAA Basketball season to begin and watch true desire take the floor.
Escritor Anthony Otero at 1:02 PM