A Story about Dad 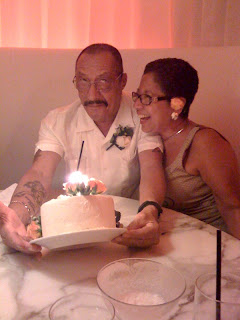 My Dad and Step Mom at their wedding reception last year
Like most teenagers, I was rebellious.  I didn't want to hear what my parents had to say because I was absolutely sure that they both had no idea what it was that I was going through. Sure, they had been in their teens before but that was a different time. The world was different and it was me who was stuck going through a divorce with parents who seemed to almost hate each other.

Even in college, I felt relatively the same way. By then, I was living with my dad and we would clash over just about anything. My need for freedom and his need to protect me would produce angry words and tears. There was a point in which we may have both felt that we were never going to see eye to eye on anything! I found myself not asking for advice because I thought that I need to get through my life by myself. After all, I had friends and they knew me just as well.

Then it happened. The first time my heart was broken and I did not know how to deal with it. I struggled with the pain and the torment for days that lasted into weeks. None of my friends could really help but listen to me. They  would try their best to help me find my way. I knew deep in my heart that there was one person in this world that may understand the pain I was going through.

So, fighting the tears in my eyes, I called my dad. Right away he knew...this man knew how much my heart was hurting. I told him everything. I felt for the first time in my life...he listened. Not to say that he didn't listen before but this time it was so very different. When he spoke, it was the softest tone that I had ever heard him speak. He said... "Son, I know what you are going through. I have been there. I have had my heart broken too at your age". Tears rolled down my face. I had to put the phone down just enough to so he could not hear me sobbing.

That was the day I connected to my dad. That was when I realized that he had always been right about everything in my life. Everything about women, everything about sex, and everything about LIFE. We would talk on the phone for hours that day sharing stories and how everything I was feeling...he felt. He convinced me that I will be ok and I was.

I am 36 years old and my father is still right about everything and I am ok with that. We rarely fight and we just learned to talk. He does know me better than anyone else. My dad has always tried to make sure that I do not make the same mistake he has, but sometimes that cannot be helped. In either case, he is always there to pick me up when I need it.

I have learned to a mentor to my students because of him. Happy Father's Day Papi. I love you.
Escritor Anthony Otero at 3:45 PM