It is really insanely cold outside. I wish I could explain what it feels lie to just walk outside and be bundled up and shit be freezing. It takes may car more than 10 minutes to warm up. It reminds of when I went down to New York City in December and my brother needed to run some errands. I was in his condo chillin with my nephew. We played the Wii most of day and night when we had gotten a chance. My brother saw this particular time as a opportunity to go out and pay a bill. 5 minutes pass and we walks back in talking about "how brick it is outside". I just look at him like he is wimp.

New York City cold is definitely not like Syracuse cold. It has been Arctic up here here. People think I am joking when I talk about the icicles hanging from my house. I will have to take a picture of them. I think that I can break off a piece, pack it in some frozen type of package, send it to a small town in Central America and irrigate the land. That is how big these glacier like icicles are!

But, this is what I don't get. I want someone to explain this shit to me. Why is it that I will always see a white person with no coat...not hat...no gloves...just chillin like it ain't at all cold??? I mean I have seen people in shorts just walking around campus...or women with open toed shoes. How is this at all possible?

It takes me less than 10 minutes to walk from my job to the garage. By the time I get there. I have frost on the mustache! My fingers are numb! I saw this white guy chillin on the phone with no jacket. Now, don't get me wrong. There are plenty of cold white people that are just as bundled as I am, but you have those few that are just nuts!

Just want everyone to know that I have started adding my old blogs. So if you interested, they are all from dated in 2007 and further. 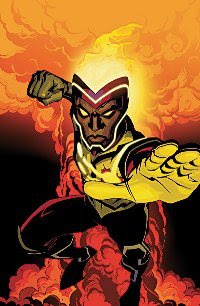 Jason Rusch was a seventeen year old teenager living in Detroit, who wanted nothing more than to escape his home city. He lived with his father, who had turned abusive after he lost his hand in an industrial accident. His mother left his father sometime after the accident, leaving the young Jason with his father. Jason later recalled that his father had hit him on four occasions. With the loss of a job he needed to fund college, Jason turned to a local tough for money, accepting a job as a courier. It was on that job that he encountered the Firestorm matrix. (taken from wikipeda)

The original Firestorm was white and when DC comics decided to change this character Black there was a huge uproar amongst fans of this character. There is a message board on the DC comics website that just talked about how much of joke this character was. I has even gotten into words with some fools. While a lot of the discussion was not so much about race, it was clear that many fans were upset that he was now black. What made this change interesting is that books mainly feature Black Superheroes in the main role, do not sell very well. So, many people predicted that this book would not last a year. The book lasted 35 issues, which was 3 years.

In reading this series, Firestorm was treated as any other hero. Not that his skin color did not matter but his relationship with his father and mother was certainly not because he happened to be African American. However, his best friend Micky, was in college and was Latino. There was a point in which he did fight some Neo Nazis, but that fight did not last too long.

I will rate all black heroes I profile from a scale of 1 to 5 based on their cultural significance. I give Firesorm a 4. For being the only Black Superhero in DC to be in his own comic for 3 years, which is a first...

Nice post. Personally, I think Jason was handled quite well as a character and a person. He wasn't defined by his skin color, and yet they didn't shy away from it either.

Summing up, he's a courageous hero and an interesting young character.

If you are interested, I run a blog dedicated to all the incarnations of Firestorm - http://firestormfan.com.

I do like the way Jason was handled too. I will check out your blog.