Michael Jackson - In My Own Words 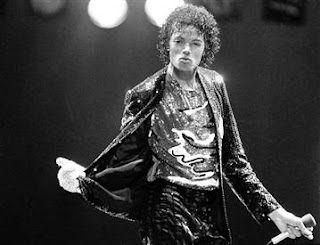 "Life aint so bad at all, If you live it off the wall" - Michael Jackson, Off The Wall

I am stunned. I am still in shock. I cannot believe this man is dead. My own reaction surprises me when it comes to the death of Michael Jackson. I guess I was one of the many people who took for granted that he would always be around to entertain us. Amazing how it is all about us. What about him?

I grew up in the 80's and as I look back at that time, Hip Hop was just beginning and Disco was ending. Ronald Reagan was in office and the era of greed was being born. The Cold War was in effect and I remember having nightmares that we would have a Nuclear War with the Soviet Union. I was a skinny kid that felt he was ugly and struggled to find his place in a Catholic School he hated going to. There was one person that made that go away: Michael Jackson.

He was a larger than life icon that I identified with. He was cool and had such a swagger in his music videos. I wanted to be him, even if only for a few minutes. His music made everyone stop and dance. I remember my aunt having the Thriller Album. See with vinyl, the covers are huge! It was him laying down and when you folded out the cover would see him laying next to a Tiger! I was so amazed by that.

I connected with him because they would play the Jackson 5 cartoon in syndication. So, you could see adventures about them and listen to their old music. I was young enough to believe the music was all the same anyway. But, seeing him as a kid gave me a sense that I could be like him. I mean think about it...How many black cartoons were on TV besides Fat Albert?

Which beings me to my next point. He dominated POP music! He was a black man first and he dominated the industry. I remember staying up late to watch Friday Night Videos and New York Hot Tracks (I did not have cable at that time) to watch Beat it or Billy Jean. You have to imagine the impact of this black man on the black and latino youth. He was it. The problems in the Bronx would seem to fade when his music was on the radio.

I know...he had problems in the 90's. I feel I need to say something about this. This man was the kindest man in the world in part because he never grew up. He never had a childhood and endured an abusive father. The pressure of being in the music industry is only enhanced because he lacked self esteem. He got lighter and lighter to gain acceptance that he felt he needed. He hated his nose because he felt he was ugly. We will never know what made him hate his image but I can say that he had a mind of a child and children is what he connected with the most.

Most people have passed judgement on a man we have no idea about. He was misunderstood. We do not know what happens behind closed doors. There was a trial and he was acquitted, but the court of public opinion will always rule. So, everyday he died a little inside. I am sure all he wanted was to have his childhood back. More people came forward with accusations and he paid them because he did not want deal with a trial. Why? Because trial or not. He was guilty in the eyes of the media.

I feel that he knew he was going to die soon. It just makes sense to me. He made music only for his children to hear (funny how no one mentions child molestation of his own kids right?) when he is dead. Who does that? He declined the Jackson's Reunion Tour. Sure, he had a tour in the works, but I think he just knew...

It forces me to think about my own mortality. Yes, every death does. But this one hurt the most. Right now, it just makes me think about my entire life. When I hear his songs I tear up because some of it just hits home. Particularly his songs about love.

It is over now. He is dead...coincidentally, of a heart that could not take it anymore...a broken heart. He died a lonely man. That is punishment enough for anyone who thinks he committed a crime. It is over. Let the man rest in peace.


I will miss you Mike, your music will live in me forever.
Escritor Anthony Otero at 10:50 AM

this is probably the best write-up i've read about Michael Jackson!

Great Post.. Just reading this shows how much this has truly touched you. I'm personally not ready to accept that such an icon is gone..regardless of the negativity that surrounded him, his music will live on...remember MJ was like us in the end...only human...

This is an awesome post, and I couldn't agree with you more.

Wow. This post really blew me away. I think we have two types of MJ-ers, the ones who swear he could do no wrong, and then the vicious haters. I think your post is one of the most balanced reminiscing pieces I've ever read. I'm still trying to get over the fact that Mike is gone. So sad.

Generally a good post and I agree with the majority of it. There are a couple of general observations I wish to add which are not necessarily a criticism of this post. It's interesting when a person is pure, selfless, generous, fun-loving and untamed by convention, such as the case with Michael, they are considered to have "not grown-up". If only we all could be this way as adults, the world would be a far more creative and humane place. Secondly, some seem to be making assumptions about Michael being the one with the problems. Who would blame him for trying to claw back both some self-esteem lost by the taunts of his father, with cosmetic surgery and fun, after a childhood apparently devoid of it, with his innocent devotion to children. That's personal power I say. If other people don't like that, isn't that their problem? Thirdly, I can't say it makes any sense to me he died so soon, except if I view it this way. He was too good for this world. However, I really hope he enjoyed his life and also realised just how big his legacy was. I also really hope he had many people who were important to him. It does expose human nature though to think that not even money can buy expertise and loyalty. I can't believe he is gone. Words cannot express the whole range of emotions that come with his passing. It does make one question the whole meaning of life. What an enormous hole he leaves in creativity and humanity.

This is the second post about Michael Jackson that I read this weekend. The first one has prompted me to work on a post for my own blog (hopefully it will be soon) and this one has underscored it.

Very well done, especially since you did it at the time that it was fresh and emotionally charged.

If you want to read the other blog post I read yesterday, you can find it here: http://lazybuddhist.wordpress.com/2009/08/22/michael-jackson-the-comcast-guy-me/

He is really the man! Inspiring and entertaining people is really an awesome job. That's why there's no doubt why millions of people miss him and love him.