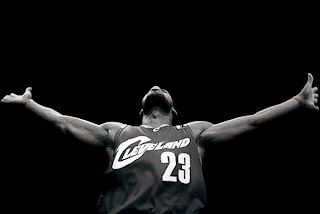 It is no secret that I do not care for the NBA. Well, not anymore. The game is not as I remember it. I consider myself a Knick Fan. Back in the Ewing days, there was nothing better than to cheer for the Knicks. Even if they did get beat by the Chicago Bulls every year, New Yorkers believed that we were going to eventually get over the hump and win the NBA title. Clearly that has yet to happen.
But somewhere between Micheal Jordan retiring and Patrick Ewing being let go, the NBA had changed for me. It seemed the rivalries had left. There were no more surprises to me anymore. The refs seem to be controlling the game...and after the last ref admitted he fixed games, it just wasn't real to me anymore.
Sure the NBA has players like Kobe and Shaq, and that time they were both on the same team. Things just seemed like championships were inevitable. For that I could watch the WWE and have a lot more fun.
However, there is one man that I would pay to see. One man that I would actually watch play this game. That man is Lebron James. He has a kinetic energy about him that electrifies the sport. Lebron has the winning instinct and the attitude, along with the skill to keep you on the edge of your seats.
See, I am not a Kobe fan, never was. I think he is arrogant and a pompous brat. He ran away teammates and coaches. When he didn't like what the Lakers were doing, he would pout and say "trade me". What really gets me is that he is compared to Michael Jordan. That comparison should not even be made.
Of course back in the day i hated the Chicago Bulls. They beat the Knicks all the time. But, I could never fins myself hating Jordan. I just couldn't. He was too good and at the time we all knew he was the greatest player to step foot on the court.
Which is why I like Lebron. To my knowledge he is not compared to MJ. Simply because he is Lebron James. There is no one like him. The Cleveland Cavaliers have shaped this team just to fit Lebron. He is very unselfish and can just take over the game.
Now, I am not rooting for the Lakers. Quite frankly, I hope they lose on the way to the NBA Finals. However, I think I would love to see the Cavs and the Lakers in the finals to watch these 2 guys play each other.
I think you know who I will be rooting for...
Escritor Anthony Otero at 11:29 PM